I speak Danish. I have lived in Denmark for more than a decade, and I speak it reasonably well, or at least well enough to appear in my daughter’s school play in a Danish-speaking role. Other foreigners frequently ask me for my advice on how to learn Danish.

It wasn’t easy. For the first few years, I made plenty of mistakes.

Thrown out the window
Like, for example, the time when I was forced to quickly leave a sublet apartment, and told everybody that I was not thrown out (smidt ud) but thrown out the window (kastet ud.) Or like the time I went past the Fødevareministeriet (Agricultural Ministry) and, getting fødevarer confused with fodtøj, wondered why Denmark had such a big ministry for shoes.

I didn’t have much luck learning Danish from the government-funded Danish-language schools. Although I hear they’re better now, when I arrived their programs were clearly designed for a low-skill type of immigrant. One made us repeat over and over, supposedly as a pronunciation drill, “Jeg arbejder på en fabrik i Vanløse.” (“I work in a factory in Vanløse.”)

They also insisted on lumping candidates from all countries in a single class, being politically unwilling to accept that someone from Sweden might learn Danish a little faster than someone from, say, Korea. As each day’s class entered its third hour, the Swedish girl was drawing pictures in her notebook, while the guy from Korea was lost and gradually losing the will to live.

So I got a private teacher, which worked better for me. Written Danish wasn’t too hard; it’s straightforward and free of all the kaleidoscopic verb endings of Spanish and French and the silly old-fashioned spellings of English.

Only a part of each word
Unfortunately, written Danish has absolutely nothing to do with spoken Danish. Danes, in a salute to Scandinavian minimalism, say only part of each word. Thus, what looks in your workbook like “Hvad hedder du?” (“What is your name?”) is actually pronounced “Hv’ hed’ du?” Learning to understand spoken Danish is learning to guess which part of the spoken word is missing.

While you’re trying to learn to understand spoken Danish, the best people to listen to are other foreigners. Other foreigners, in their ignorance, say entire Danish words. One of the first Danish speakers I could understand was the Queen’s husband Prince Henrik, who was born in France. Danes hate the way he speaks Danish, but that’s because he says the entire word, every time.

I can also recommend watching hand puppets on television – since they have no real mouths, whomever is speaking for them needs to enunciate very well. Anything on TV in Danish with Danish-language subtitles for the deaf is also good. If all Danes came equipped with subtitles, life would be much easier for foreigners.

Hver dag og hverdag
Anyway, you might as well take mumbling as an advantage and mumble yourself. It makes it a lot harder for people to tell if you are making mistakes. I find it a particularly effective way of hiding my problems with adjective endings, i.e. the correct “hver dag” or the incorrect “hvere dag.” (By the way, “hverdage” (week days) does not really mean “hver dag” (every day of the week), as I found out when I tried to go to a “Åben hverdage” shop on a Sunday).

At any rate, you will often be surprised to find Danes themselves differing about spelling and other points of language, particularly when it comes to the use of commas, which can make these ordinarily gentle people come close to starting a fist fight.

I can suffer it
Small disputes aside, the Danish language generally reflects the homogeny and harmony of Danish culture. That means no one ever says anything too definitively, for fear of having an unpopular opinion and being forced to back down.

For example, if something is good, you would say in English that you definitely and positively like it, but in Danish you will say that you kan lide it, directly translated as you can suffer it. This construction keeps Danes from being unfashionably enthusiastic about things, and thereby assuming their opinion is more valuable than others, as proscribed by the Jantelov.

Also keep in mind non-committal phrases like i mine øjne (in my eyes), det kunne godt være (could well be), and the all-time favourite, blandt andre (among other things). Blandt andre should be added to the end of every list to make sure no one will ever be able to accuse you of leaving something off the list.

Watch out for O and Ø
Let me leave you with a few final tips. Watch the “o” and “ø” – for example, the “Mønster Bageri” near my home is trying to tell people that it is an excellent bakery (mønster), not that it is full of monsters.

Be careful about words that sound similar: after hearing a safety announcement on the 2A bus, I once tried to explain to a deaf old lady that “en tyver” (a twenty cent piece) was in town picking pockets, when I should have said “en tyv” (a thief) was at fault.

And take special care when you use “dufte” (smell good) and “lugte” (smell bad) It’s the same word – “smell” – in English, but people get real mad if you tell you can “lugte” the dinner they spent all day preparing.

Actually, there is a secret to learning Danish quickly, but it would horrify every Dane. That said, it assisted me enormously with grammar, vocabulary and comprehension. I might never have learned Danish without it. The terrible secret is: Learn German first. If you can speak English and German, functional Danish is only a few months of practice away. 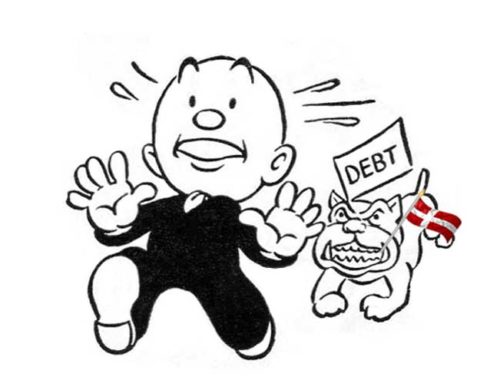